This post contains affiliate links for the Winchester House. For disclose information, see the Promotions page.

I have always wanted to see the Winchester House. It is a story that I have heard about for years, and everyone seems to agree that the house is not only haunted, but a haven for the spirits. Located in San Jose, California, the Winchester House is unlike anything else built in the Untied States, or anywhere is the world. The history is long and strange, full of sadness, fear, ghosts, curses, and lies. A movie has recently been released about the Winchester House, and there are countless stories and specials about this location. No matter what you believe about ghosts and goblins, there is no doubt about this architecture marvel. Let’s take a look at the strange story of how this wondrous house was built. 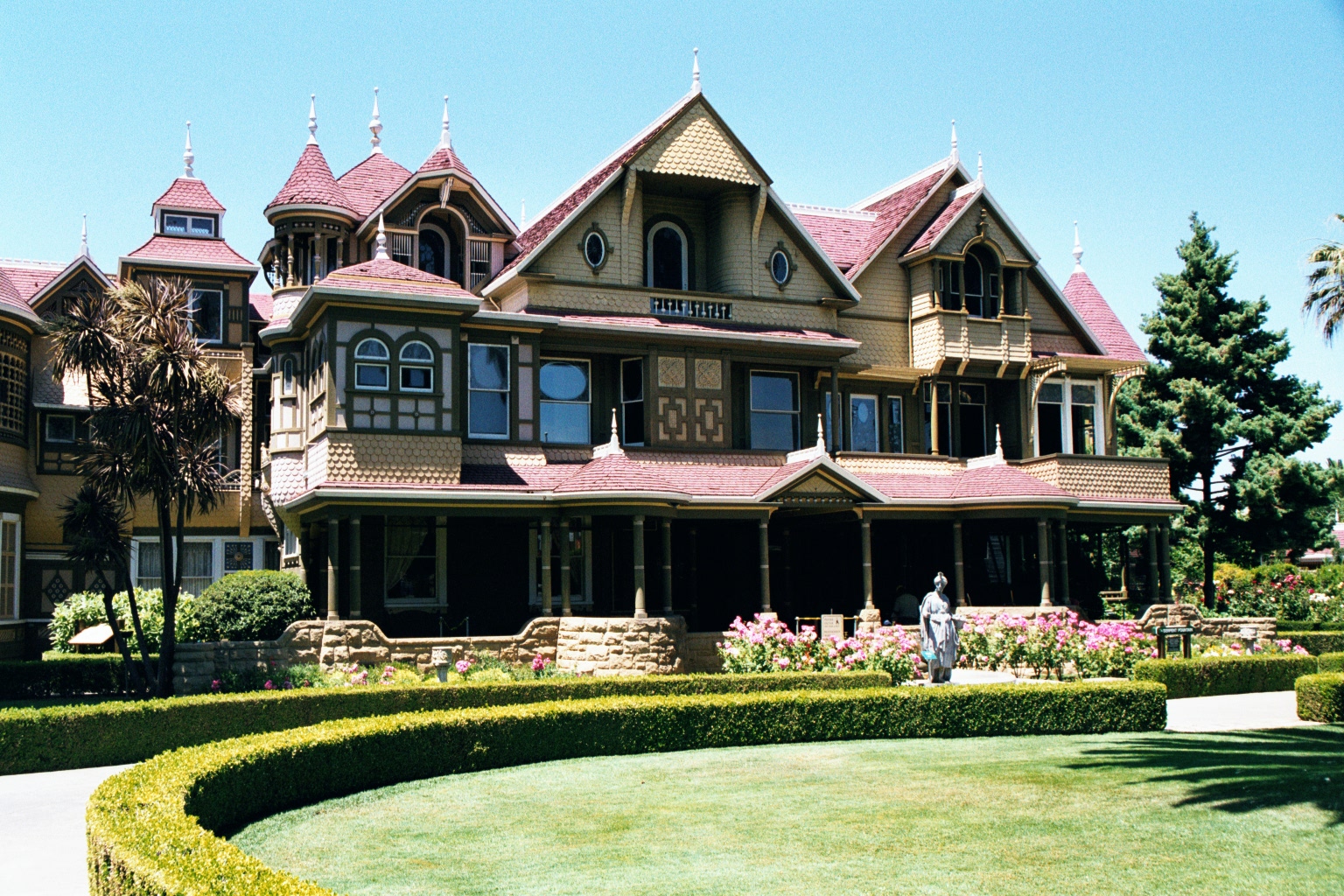 Sarah Winchester was married to her husband, William until his death in 1881. They had no surviving children. William Winchester was one of the founders of the Winchester riffles which made them extremely rich. After the death of her husband, and daughter, Sarah found herself very alone, and very depressed. Many reported that she sought out the help of a Spiritualist who did communications with the other side. During this time, Spiritualism was huge, and it took advantage of many people who were sad and grieving. This was the belief that the living and the dead could communicate through people such as mediums. They would usually gather together with several people and put on some what of a show with moving objects and candle light to tell their story. It would have not been unusual for a woman in her position to seek out the guidance of a Spiritualist, however, this story has never been confirmed.

The legend goes that during one of the many seances that Sarah Winchester held, the medium gave a strange and chilling message from the other side. It seems that the spirits of the very people that were killed by the guns they profited off of were not happy with Sarah at all. In fact, they gave her an order to purchase a home, and never stop building the house. If Sarah Winchester failed to to this, then the spirits would take revenge on her and she would die. Sarah took this threat to heart, and purchased a Queen Victorian Style home and started renovations that would last the next 38 years. It was told that Sarah had work crews working around the clock. When they ran of conventional things to build in the house, they took to unconventional things such as doors that went nowhere, and rooms that were too small for any human to pass through. This was to appease the spirits, but they reportedly haunted Sarah until the day that she passed away.

While a great ghost story, there is little to no evidence that any of this is true. Even the official story of the Winchester House on the tour tells strange and thrilling ghost stories. It is fun and exciting, but is any of it actually real?  People seem to ignore that maybe Sarah was not motivated by ghosts at all, but her own vision. Sarah Winchester was interviewed several times while she was building, and she spoke of how she adored designing. While her plans were strange, she designed many of the rooms herself. While she did feel guilty of the lives lost that built her family’s fortune, she was not crazy as some would want her to seem. She was a woman who knew what she wanted to do, and designed it herself without asking permission or giving explanation. There were in fact years that went by without any building, that was a direct contradiction to her supposedly working non stop to keep herself alive. There is no doubt that Sarah was depressed and had a hard time dealing with the loss of her loved ones. However her strange behavior and belief in ghost may have been nothing more than a board of men trying to make the woman who held a lot of power seem feeble minded. Today, she would have been known as an innovator, while then she was known as essential and crazy.

No matter the truth of the story, the house itself is site to behold. No blueprints of this house exists and even years after Sarah Winchester’s death, they are still discovering new things about the home. There seems to be a running them of the number 13, which has given this house another layer of fear and curses. The house is a maze, and it can be dangerous since there are tricks in the floor, staircases to nowhere, and door that could cause a person to fall to their death. There is no good estimate of the size of this house, and it seems like it grows on it’s own due to tricks of the eye. The whole thing makes a wonderful ghost story. In fact, Steven King’s series Rose Red was based loosely off the legend of the Winchester House.

While it’s an excellent story, no one is really sure if the ghost stories are real or not. Or, if Sarah Winchester lost her place in the history of design and building due to the fact that she was labeled as crazy. The house is alive on it’s own, and there are secrets living within the walls. When the recently found a safe built into the wall that was covered by many mazes, they found a lock of Williams, and a lock of her daughter’s hair. Perhaps the house was not haunted by ghosts at all, but a way for Sarah Winchester to preserve the things that really mattered in her life.