What you won’t see: Game of Thrones Season 8

Hello Underdogs, and I hope you had a wonderful weekend! As many of you know, I am a super nerd and I love things like Doctor Who, Sherlock, Marvel, and of course, Game of Thrones! While we only have to wait until Christmas for Doctor Who, Marvel movies are coming out all of the time, and Sherlock is just a wish and prayer, we know that we have a very long night before we see Game of Thrones season 8! That means we, as fans, have a lot of time to theorize, and quite frankly see how strange things can get before the show comes to a close. Here is a list of  things I believe we will never see in season 8. This does not mean that they will not be in the book series, because that’s such a different world. For example, Jon Snow is still dead, and that may never change. This is only for the TV series that only has 6 episodes left. I know they will be extended but I honestly don’t think they will ever include every single thing that fans want to see from the show’s past, or even from the books. This isn’t any order, but here are my thoughts on what we will never see! 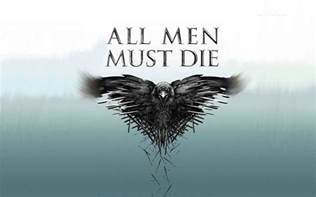 1. Howland Reed: I’m sorry, folks, but I don’t believe we will ever see Howland Reed ever again. What can he really bring to the story at this point that couldn’t be given to us via other characters. We have emo Bran and Sam to help us with the important information of Jon’s heritage. Why would we need to see Howland Reed again? I just don’t see anything that he could bring to the table or add to the current story line.

2. The Night Queen: So far, we have only see the TV show’s version of the White Walkers, and they are all men. Like real life, powerful women have been left out and history rewritten without them. The Night Queen would be awesome to see, and many think that Dany will become her, which I guess could still be possible. But we won’t see the historic Night Queen from the beginning of the Night’s Watch.

3. Qwath: The mysterious woman who told Jorah information about Dany, and who speaks to Dany in the books. There is nothing known about her, and nothing that I can see to bring her into season 8 of Game of Thrones. She has been absent for a very long time, and it seems such a waste to introduce such an interesting character, but do little to nothing with.  What would be the point to see her now? Maybe she one of the Red Priestess, but then again, what would it really matter now since she seemed to only be in a passing scene to warn Jorah about Dany being in danger.

4. Hodor as a White: I really hope this doesn’t happen because hasn’t this particular story line been sad enough. I thought we might have seen him in season 7, but why drag it out until season 8? This could happen, but this is one I really hope to never see. Game of Thrones has never been about happiness and does punch you in the gut, so maybe this is coming!

5. Jon, Arya, and Sansa morging: In the books, Bran is not the only one who can morge into animals. They all can, although  Sansa isn’t that developed. Arya and Jon have actively morged into their wolves and crows since they were younger.  With all the other active magic in this world, I would find it hard that the Stark children would all of a sudden get these powers at the very end of this story.

6. Prophecy fulfilled: There are so many prophecies in this story, but I don’t think any of them will come to light. I think it’s due to the fact that George R.R. Martin is vastly against anything to do with prophecy or even religion. While I think that it will seem like these prophecies are going to happen, none of them will turn out like how they were predicted, or even how the old stories were told. Like Old Nan said, all crows are liars.

7. Sweet Robin: We haven’t seen him in a full season, and I think his story line is done. We may hear mention of him in passing, but again, what would he bring to the story now? Maybe, he won’t have any lines, but he will come back as white? As far as anything to do with Sweet Robin and a story line, I think we have seen his last days already. Besides, the actor who plays him has really gotten tall! It’s very obvious that we haven’t seen him in a long time.

8. Clagamebowl: I know we all want to see the Hound Vs. The Mountain, but we may not get the payoff that we have been hoping for! I think they may start, but we will never see the finish because too much is going to be happening around them for their own fight to continue. I will always be #teamthehound, but I don’t think we will get the pay off we have all wanted.

9. Lady Stone Heart: Another character that would add no value to the story at this point. While she has a large part in the book, in the series that have gotten by without her quite well. It doesn’t mean that we won’t see her and Rob again as Whites, but that doesn’t seem likely. Lady Stone Heart will not be on the show at all.

10. Jon Snow Dying for good: Jon Snow can’t die because he is already dead. At least that is what I think. George R.R. Martin confirmed that Jon is a Fire White, which is the exact opposite of the White Walkers. He is dead right now, and has been since he was brought back. Think of it, Jon should have died many times during the Battle of the Bastards, and even when he was under the water for such a long time at East Watch. We won’t see him have a full death that will keep him down forever since he is already dead.

11. Arya’s List: While Bran mentioned Arya’s list in season 7, I think we won’t ever get to see her cross off the last names, especially Cersi. While people think Arya could still kill Cersi, I think it will be Jamie but not Arya wearing Jamie’s face. Arya will leave her list behind due to the great war. It won’t be important for her to continue on her one woman man hunt with the undead is hunting everyone she loves.

12. The end of Dragons: Many people theorize that  in order to stop the Night King and the White Walkers, everything that is magically must be destroyed. This would include dragons. There are only 2 left, so that looks like it’s very possible. However, dragons, according to the lore of Game of Thrones, can switch sexes and mate. I think they won’t go in away. In fact, I think they will come back in strides.

14. Dany killing Varys: Even though Varys got a cryptic message from the Red Woman that he too would die in this strange country, it doesn’t mean that he will die soon. People think he would betray Dany, or is thought to betray Dany, and she will burn him alive. I don’t think it will happen. Varys got a message from a voice years ago from a fire who called out to him. It changed his life and caused great fear. He also is a survivor, so if he ever thought that Dany would burn him alive, why would he go be by her side if he thought she would murder him by burning him?

15. The truth of the Whites: Who are the Whites, and who is the Night King? Are we ever going to get a backstory about these beings? Why are they here?  To kill humans? To teach them a lesson? To kill because it’s super fun? Who knows, but I don’t think we will ever get a real answer because the unknown is so much scarier than reality.

16. Arya and Jon reunion: I don’t know why, but I don’t think we will ever see Jon and Arya reunited. While they may or may not mean one or both of them have died, I think timing will be off and they will miss each other. Circumstances will keep them apart, and I think that would be very sad since all of us have been waiting for this to happen.

17. Robert’s Rebellion: While there are several spin offs for Game of Thrones, it hasn’t been confirmed if we will see this as a series. If not, then we will never see it in Game of Thrones at all. I really want to see Robert’s Rebellion because that is what started this whole thing. Was the King really Mad, or was that just an excuse that was told? Did Jamie really kill him? Why did Robert get to take the Throne? So many questions that we may never get an answers to!

18. Ghost: They used most of the CGI budget on the dragons and the White Walkers. While I love Ghost, I want to see the Golden Company and their elephants.

19. The Bran Connection: There is so much speculation that our Bran is the same Bran throughout time. For example, our Bran, and Bran the Builder are the same people. This means that he travels back and forth in time and influenced events on both sides. He did it before with Hodor, so why is a leap that he couldn’t leap in time to try to save humanity.

20. A winner: No one is going to win the throne. I think that there will be so much destruction that those who are left will not stand for one person sitting on a throne and ruling them all. I don’t think Jon sit on throne, nor will Dany. I don’t think any of them will live to that point. I also don’t think anyone else will  get the throne since they will come to understand that humans were the bad guys the whole time. The Whites and Walkers were the true victims of a song of Ice and Fire. I’m looking at it as thought World War 3 just ended and the people who lived are determined to record and learn from their mistakes, but also do their best to not repeat it so they will never be in this position ever again. That would mean bye bye throne, and bye bye great houses.

Those are my thoughts of what will not happen on Game of Thrones, season 8. I could be wrong, and I might be right. I think the books have a lot of wiggle room, but the series is very limited by time. A lot can happen in the episodes, however, with them trying so hard to wrap this thing up in a sprint, lots of good things will be left out and we will never see them.  I have a feeling that no matter what happens, we will be let down in some way. If that means we hate the ending, or a big plot hole is never fixed, or we never see some of these great flashbacks like from Robert’s rebellion, we will miss something. They have to pick and choose so many of these great things from the past will be glossed over for the sake of the bigger story.

What do you think? How do you think Game of Thrones will end? Will series 8 show any of what I have listed above, or will they ignore them in favor of other plot lines? Leave your comments below!