This is the official Underdog Review for “Twice Upon a Christmas,” which is Peter Capaldi’s last day as The Doctor. It is also Steven Moffat’s last show, but I will cover his legacy in another post. He deserves his own blog devoted to his genius.  This post will contain spoliers, so if you haven’t seen this show yet, stop reading this post.  I believe that no one was more prepared for this role than him. I meet him briefly last year, and he will forever be in my heart, and will always be The Doctor. It is going to be sad for him to leave, but I know we will see him as a Time Lord again.

“Twice Upon A Christmas” marked a special time of saying goodbye to one Time Lord, and saying hello to a new one. We see David Bradly take up his role as playing the First Doctor, and somehow these two are brought together, while we find out that both of them are refusing to regenerate. A solider gets sucked up into the timeline and we find that mysterious glass figure is asking to replace the solider and take him back to the moment of his death, in exchange for Bill. The two Doctors go on an adventure to try to find out what these glass things are, fearing they are evil. It is actually not a bad thing at all, but a way to preserve memories, and have the past speak.

While all of this is happening, The Doctor, Peter Capaldi, is refusing to regenerate. Why? Because he is tired. He is also filled with glass images of the people he loved from the past. All of those he traveled with and loved are ghosts. It is a curse of a long life. The very cool thing about this episode is the very real pain of life and loss, but the need to keep going for the greater good. They return the solider to his moment of death in exchange for Bill. This is where he asks The Doctor a favor. He asked him to look after his family, the Stuarts.  Quite frankly, I started crying at this reveal, and didn’t stop after that moment. There isn’t a big baddie in this finally, it’s a tug at the heart strings.

I also love that they included a wonderful legend of the day everyone called true during World War 1. I have no idea if this is a true story at all, but I have heard it. I have heard that on one Christmas day, both sides stopped fighting and sang carols and celebrated together. Again, I’m not sure if it is real, but what a real delight bringing this moment to life even for a moment. It was very much a Steven Moffat moment. “For just this once, everyone lives.” We also get a few cameos from Bill, Nardol, and Clara who are there to say goodbye and also, to tell The Doctor no matter what he chooses to do, they support him. The Doctor was granted his memories of Clara again, so he was able to recall who she was, and why she was special to him. This was a very bitter sweet moment. 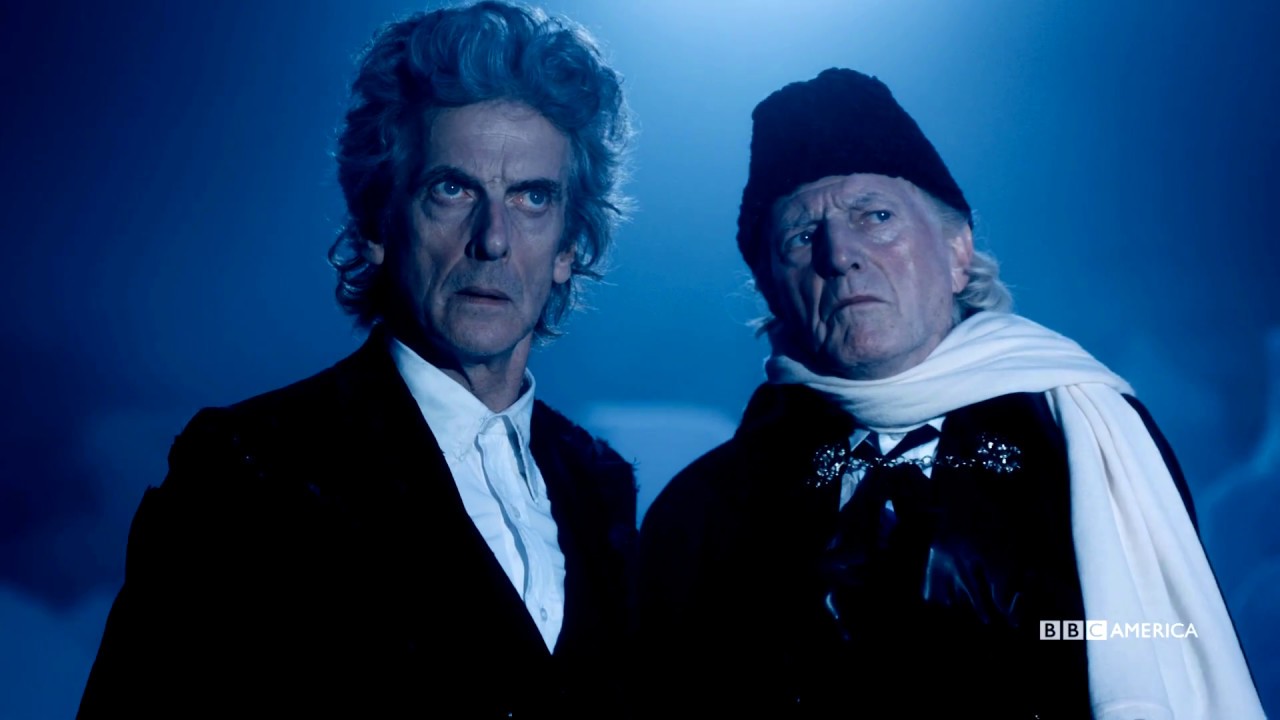 The Doctor goes to his Tardis alone, which at first was what I was worried about. I kept saying to myself, please don’t let him do this alone. Don’t let him go through this alone. When 10 changed to 11, he was alone and it was heartbreaking. He was alone, however, and seeing how they did this scene made perfect sense. It was just a boy and his box, just like it should be at the end of the day. No one would be able to tell The Doctor what he should do more than the Tardis could.  She reminded him that the universe needs him. He then regenerated.

Peter Capaldi’s goodbye speech was by far the best one that I have heard. He reminded us to never be cruel, or cowardly, and to always be kind. Although it seemed like this was a death, it was just a change. The change is hard, and hope can be scary, but there is always adventure waiting out there, and love is so very important. When he spoke about children hearing his name, nothing touched me more. As we all know, Peter Capaldi was a fan of the show since he was a small child. As a kid, he wrote fan letters, and started a fan club. That love got him all through his life and finally to a lovely guest spot during David Tennant’s run. He was cast as the 12th Doctor in 2013 and made his first appearance in the 50th Anniversary.  Literally no one has been more prepared to handle this job. The child heard the Doctor’s name, and became one of the best versions we have been lucky enough to see. This show is all about hope and magic, and Peter Capaldi reminded us how magical The Doctor is, and always will be.

I then went from crying hard to laughing hysterically when I saw Jodie on screen. It was so perfect. It was years of waiting for a moment like this to happen and it was here. She is real, and I was so joyous about this moment I was laughing at the top of my lungs. I’m sure I seemed like a mad woman, but this was perfect, just perfect. I’m so sad to see Peter go, but I’m so happy to see what Jodie will bring. This is groundbreaking at it’s best.

This was a lovely story and it was nice to not have a big baddie for once. It was so wonderful to see David Bradley do the First Doctor again. All of the Easter Eggs were wonderful as well. For example, we got to hear about how Polly cleaned the Tardis. He is brilliant as The Doctor, and it’s so nice to see him on screen with Peter saying goodbye. I am sure this is not the last that we have seen of Peter Capaldi in Doctor Who, but for now his time is come to a close. He will now, and forever be the Doctor, and I don’t think anyone is more deserving of this title than him.

On a personal note, I am amazed at Peter Capaldi’s love and devotion to his fans. There are so many stories as to the many wonderful things he did for children and fans as The Doctor. That will never end. That is what playing this role is all about. As a child, he was given hope  through this character. It came full circle as Peter Capaldi played The Doctor, and gave a whole new generation of people the same hope he once had. There really is magic in the world. The world may not be a fairy tale, but that is when The Doctor comes in at. Boy, did Peter Capaldi bring a lot of magic to so many. Thank you, Peter Capaldi, and you will be greatly missed.