Saved by the Bell Illuminate?

“Saved by the Bell,” was a Saturday morning staple for so many people. It is a simple and innocent TV show that revolved around 6 friends, their antics at school, and their very zealous love lives. The show started off as an entirely different series called, “Good Morning, Miss Bliss,” with a few of the familiar players. That very quickly changed and morphed in the show called, “Saved by the Bell,” which moved from Indiana to Bay Side, California. They added new characters who had a lot more money, fashion sense, and even cell phones that literally no one had in those days due to the outrageous expenses. Zack Morris’ cell phone would have cost $4000 back in the 1990’s, and today it would have cost $10,000 for a single phone. That’s not even including the cost of the calls. Why am I bringing all this up?  This is setting up some crazy conspiracy theories about the show that you have to read! Of course the cause of all of this crazy stems from everyone’s favorite blame buzzword that no one actually knows anything about, the Illuminate.

“Good Morning, Miss Bliss,” took place in Indiana at a school called John F. Kennedy.  This was a simple school that had normal students and teachers. Most likely this school could be considered a middle school or a Jr. High School. The only characters who graduated from this series and made it into, “Saved by the Bell,” were Zack, Lisa, Screech, and Mr. Belding. While these shows pretend to have nothing to do with one another, these characters have the exact same names, and many of the sets used for the schools are exactly the same.  What’s the likelihood that 3 unrelated students and their principal from the same school would all leave at the same time, to only go to the same school several states away? It’s all due to to the Illuminati! Stay with me here because this revolves around the adults who all become very rich, have great jobs, and are generally doing well in life. For this theory, I want you to keep in mind that Zach Morris’ Dad is named Peter Morris in, “Good Morning, Miss Bliss.”  When the show changes to “Saved by the Bell,” his name is changed to Derek Morris. This may be confusing, but it’s all part of the theories! Remember, these are the same men. Peter Morris goes to a parent/teacher conference and has an instant attraction to Miss Bliss. If you recall, Zack’s parents are married in “Saved by the Bell,” so this would mean they were either separated at this time, or Peter was having an affair. Embarrassed and ashamed, they decide to get Peter and his family out of there and away from the situation that could have cost a teacher her job, and save Zack from having a terrible time at school when everyone found out. How could a very average man get enough money and backing to move his family to a much more expensive state? Peter and Miss Bliss used her educational ties and found the solution in the Illuminate. Peter Morris suddenly became a rich and powerful sales person working in electronics in “Saved by the Bell,” who could move his family to California.

I know you are asking, why would Lisa, Screech , and their families also move to California? If you recall, there was hints of a romantic relationship between Peter Morris and Mrs. Turtle, Lisa’s mother. Peter Morris obviously has a difficult time remaining faithful, but why move his mistress with him when he is leaving due to another affair? The school teacher wasn’t his true love, nor was his wife. However, he couldn’t leave without Mrs. Turtle. What about Screech? Screech was a genius. He was able to build computers and robots, which would be very useful. We never knew much about his parents, but one can assume Screech got his abilities from somewhere, and Peter Morris took advantage of both his love for Mrs. Turtle, and the abilities of the Power’s family and had them join the Illuminate and move to California with him. This would give both the Turtle and the Power’s family more opportunities than they would ever had in Indiana, so of course, they couldn’t turn down the offer.

But why would Peter change his name to Derek when they moved to California? I think the name could be a very simple explanation. In order to separate himself and his family from any hint of the affair with a teacher, Peter decided to start going by his middle name, Derek. This wouldn’t be a huge change since he is just going by his middle name, so his close friends could adjust quickly. He is now allowed to leave Peter behind, and take on the persona of Derek Morris. He became a very successful business person that cost him a good relationship with is son.  It is ironic that Derek Morris moved his family out of Indiana and a bad situation that he created to give his son a better life. The change from Peter to Derek lost some things in translation and instead of being a good Dad, he was a good provider. As he aged and got more and more involved in the illuminate, he became more resentful and on some level, blamed Zack for all his troubles. He might have also resented Zach for another reason that was in no way his fault.

Why would Mr. Belding make the move to California as well? Peter Morris wasn’t the only person having an affair. That’s right, Melanie Morris, Zack’s Mom, was having an affair with Richard Belding! Both Derek and Melanie were in a loveless marriage, but they both loved their son. They didn’t have any other children that we know of for sure, so Zack was their life. They wouldn’t divorce for a various amount of reasons, but they both had affairs and the both knew of each other’s real loves in Mrs. Turtle and Mr. Belding. It was agreed that if Mrs. Turtle could follow them, then so could Mr. Belding! Why would the Illuminati want someone like Mr. Belding? If you recall, Mr. Belding had a brother named Ron. He appeared in one episode of “Saved by the Bell,” where he told the children adventure stories. Ron ran off after promising to take the students on a rafting trip, and he is never seen again. Ron appears to be an adventure seeking person who has done lots of amazing things! While we aren’t sure if this is all a lie or not, but there is some truth in every lie. What if it wasn’t Ron, but Richard who was the adventurous one who is actually like a Midwestern Indiana Jones? He was the one who ended up taking the kids on the rafting trip.  It’s such a great disguise to be a bumbling school principal but actually be in deep cover for the Illuminate! By the way, if you ever wondered why Mr. Belding had so much invested into Zach? There is a very simple answer for that as well. He thought Zack could be his son, and he wasn’t going to miss the chance to watch his child grown, even from the view of a very involved principal.

Each of these families benefited from the move to California. They had their children in a great and competitive school, and they were able to keep their children together with their good friends. They each seemed to live in great homes, in great neighborhoods. Each of the adults had good jobs. Lisa’s Mom worked at a hospital and was able to allow here child to have very expensive designer clothing. When Lisa graduated from High School, she was able to get into a very good fashion school which started Lisa on a great path. Screech, a very strange and awkward child was able to have several good friends, and even a girlfriend. He got the chance to be part of several school programs and clubs that he never would have been able to back in Indiana. He also got to go to college, but it is strange that someone so smart couldn’t get into Yale. Zack got into Yale, which is highly questionable. He had a perfect score on his SAT, which got him a free ticket into any school he wanted. However, he ended up at California University with Screech, Slater and Kelly.  This makes you wonder if Screech had the perfect score instead of Zack. 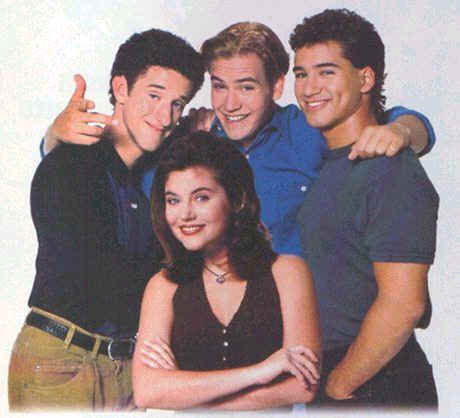 Why would Zack turn down Yale and go to a state school instead? Yale is known for it’s Skull and Bones fraternity that has it’s own legends and connections to rich and powerful people. Zack was being prepped to attend Yale and then go into politics. Zack has a natural charm, and people not only listen to him, but they want to be just like him. The powers that be changed his average SAT scores and got him into Yale. Zack knew about what the adults in his life did, and rebelled! He went to another school and married Kelly against his Dad’s wishes. Derek Morris didn’t like Kelly because he couldn’t see his son with an average cheerleader, and believed she would hold him back! Zach didn’t want the life of his parents, and his friend’s parents. Zach wanted his own life!

Zach was  a good person. Even though he schemed and plotted, it normally centered around helping his friends. For example, Zach helped set up a sale to help Lisa raise money after she spent too much on her credit card. Zach also put on an act to help Slater stay in the school he loved instead of being transferred yet again. He held fundraisers to save The Max, and helped Jessie get help with her pill problem.   Remember, Derek  promised his son to the Illuminate, so Zack’s rebellion cost everyone  dearly. You can see in”Saved by the Bell, The College Years.” how the children’s lives seemed to be going in a downward spiral.  For example, both Kelly and Screech returned to work at Bay Side High School. Not as teachers, but as assistants. Little is known what happened to Zach and Kelly’s marriage or even what he was doing for a living.  It seems like once Zack rebelled, the lives of everyone in their circle slowly unraveled. Life did not turn out the way the parents wanted it to for their children. Their actions cost them more than their own souls, and helped shape the strange life of their kids! Who knows of these beloved characters would ever bounce back after some rough patches, or if they eventually follow the same footsteps as their parents.

What do you think? Do you think the parents from Saved by the Bell had a huge presence and involvement even though we hardly ever saw them on the show? Do you believe the Morris Illuminate theory? Leave your comments below, and check out my affiliate programs. Disclaimers for this can be found on my page, Shameless Self Promotion!

Pictures were used via free image search and are not copyrighted.