The post, “Is Thanos Nature,” contains affiliate links. For more information, please see the disclaimer on the promotions page.

Attention: From here on out, you will see Spoilers from Avengers Infinity War. If you don’t want to know, don’t continue to read this post.

Underdogs, if you haven’t seen the Avenger’s movie, please think about reading this at a later time. As you know, I am a huge Marvel fan and was super excited to see Infinity War. I knew going in how tough this movie would be to watch because many of our beloved super heroes wouldn’t make it out alive. Of course, this all comes at the hands of Thanos, the biggest baddie in the Marvel Cinematic universe. He has been a huge presence and threat for the last several years, however it seems as though no one really understands why. Thanos is set on destruction, but what is the point to all of his anger and rage? Is he actually angry? Or, is Thanos not a villain at all, but is actually the one that brings about the cycle of life no matter how hard it seems, and no matter how high the cost is to himself or others.

Thanos is on a mission of death, but in his view, he is bringing life. He tells Gamora when he took her as a child, he saved her life. While she argued this thought process, he pointed out that she would have starved to death if he had left her. Her home and people were starving and poor. The land was dried up and there was little vegetation to support those who lived on the planet. Now, children’s bellies are full and a land that was once dying is alive and thriving. Thanos is traveling the universe to get the Infinity Stones in order to destroy half of all life in the known universe. Why? Not because he is angry, but because he is determined to bring balance,rebirth, and regrowth. This is a very pragmatic view and he will stop at nothing to obtain his goal, including doing things at a tremendous personal cost. Because of his power and his vision, Thanos also had very loyal followers who were known as the Children of Thanos.

Why is all of this important? It is to plant the seed that Thanos is not a hero, nor is he a villain. He is nature and brings with him the cycles of life. It is not pleasant, but it is something that needs to be done. Nature brings life, but it also takes it. The seasons change from death to life, however you can’t get life without death. Nature can be beautiful such as a sunset, beautiful flowers, and green grass. However, it also brings tornadoes, earthquakes, and flooding. Thanos is the one who believes that he needs to bring death in order to have a better life for those who remain after the storm. Could he be correct in this assumption and have to do something terrible and destructive in order to bring balance? The seasons change, but if they didn’t and the natural process of life and death did not happen as it needed, all balance would be lost. This cost could be a lot higher than the lives taken through Nature. If Nature is abused, it will fight back at any cost. 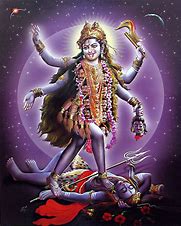 Could Thanos be more like Kali? (This thought process is not meant to be offensive at any way, but a comparative narrative.) If you are not familiar with Kali, she is a Hindu Goddess known for being the destroyer. Kali’s name means death, destroyer, and time. She is also presented as blue and has been accused of having a heart made out of stone. Sound kind of like Thanos? Kali is a warrior, and a killer. She doesn’t just murder for fun, however. She kills to bring balance. While she may seem scary to many, Kali is revered as the Mother of the Universe and has fiercely loyal followers. People see her as a protector. Because she is part of the universe, or was around before the universe as some think, she isn’t good or bad but just is. The universe needs to be restored and that is what Kali’s calling is all about. Doesn’t that seem a bit like Thanos? (https://en.wikipedia.org/wiki/Kali)

While the ones that are lost during Thanos’ reign of terror is heartbreaking, could Thanos just be doing a very tough job that needs to be done? There is no arguing that people abuse the planet which is our home. We misjudge it and misuse it, as well as ignore the messages of Mother Nature. Thanos is not a hero, but is he really a villain? He is doing what he thinks needs to be done in order to save the universe and restore balance. However, he does this without much thought or care as to the cost of what he is doing. Never the less, he makes the choice to continue down his path even when he could have walked away, because his goal is so important to him. His children help him with this task, knowing that they too could eventually be part of his deadly solution. Is Thanos a madman, or is he just acting on the cycles of life?