Happy Friday, Underdogs! We are getting ready for a holiday weekend here in the States, but today, I am going to talk to you about the international favorite, “Sherlock.” 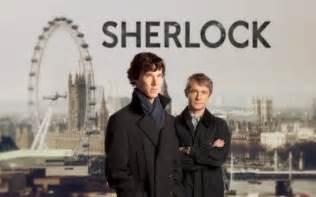 Specifically, the BBC version which has been on air since 2010 for 4 series, with one short and one Christmas special. We have no idea if this show will come back for a 5th season or not because this is a very nontraditional television show. If you have never seen it before, the episodes are short movies which range from 90 to 110 minutes. There are only 3 episodes per series and there has been years worth of gaps between each one. That is hard to swallow because if you like the show, you really like the show. I went so far to find a way to watch series 2-4 when it aired in London. This past year was the first time that the BBC and PBS arranged an agreement to have the shows air on the same day. With the time difference, I didn’t want anyone to ruin my show, so I watched when London did!

While the first two series of the show were very well received, the third and forth were not. People didn’t like the third series much, while I really loved it. In fact, it is my favorite. However, I can agree that series 4 was not as good as the other’s. What makes my opinions a bit different (not better) than the average fan of the BBC Sherlock, is the fact that I have been reading Sherlock since I was a small child. I read anything that I could get my hands on! If you have followed any of the original stories, and the spin-offs, you will see that the third series is just a natural progression of the story line just as the first 2 series. John does get married. Sherlock does get engaged to a woman to gain entry into a building. Sherlock does tangle with Magnason and he is killed. However, in the books, it is a little cloudy who actually did the killing. It might have been John.  Mary is very much loved by Sherlock and is a huge supporter of their friendship and their work. I like how they made her more modern, and more dangerous. Her story line was fantastic.

Series 4, however, seemed outlandish even for me. The stories seemed to lack a certain type of heart that the others have in the past. This could be due to the fact that partners Martin Freeman and Amanda Abbington who play John and Mary, split in real life. It was pretty apparent on screen that some very real tension existed. Mary does die in the story, but it wasn’t until she was in her late 40’s or even into her 50’s. John does move back into 221 B Baker street after Mary passes, and they go back to doing detective work. The story of Sherlock follows these men from their twenties up until when they were senior citizens. Not everything used for inspiration for the Sherlock series came from the original stories written by Sir Arthur Conan Doyle. This is why creators Steven Moffat and Mark Gatis were able to get away with so much, but still be able to stay within the world of modern Sherlock.

The story of Eros was strange to say the least. While I do like that they changed the gender of the sibling from a brother to a sister, it was a wild story. The whole last episode was very, very hard to watch. It was a mind game, like they were in a Saw movie or something. It was very emotional and very violent. I cried a few times because of how much love there was between Sherlock, John, and Mycroft. The heartache with Molly was almost too much for me to take as well. While this story really bothered me, I realize that this meant it was well-written or it would not have gotten under my skin. I loved getting to see Moriarty again, but I knew as soon as we did, it would only be a tease.

The main complaint that I heard about this series, outside of the lack of connection, was the lack of detective work. The heart of Sherlock is a very smart man who is 100 steps ahead of everyone. While we see some of this, what he misses is amazing, such as the lack of glass on his sister’s cell. While this makes a lot of people angry, I have an explanation for all of this. Sherlock was a well-known drug addict. His drug of choice in the stories were heroin and cocaine. He was drugged out more times than he was clean, so why couldn’t this entire series be Sherlock coming down, or even hitting bottom? He lost his best friend when he got married, being around Molly was painful for her, and his other best friend, Mary dies. Sherlock went through a downward spiral of depression and drug use that severely damaged his skills of deduction. We don’t see the pretty Sherlock, we see the tortured soul who is too smart for the world, and has no clue how to function outside of the world he created for himself.

Sherlock evolved because his character had to. He was getting older and the world around him was changing, so he had to adapt. That may mean that his adaption skills, like many people in real life, were not good or even healthy. The Sherlock in the stories could be a bit kind, or a bit harsher. It shouldn’t be a surprise that the TV Sherlock had moments of heart, and moments of being a bastard. He could be so detached from reality that he literally had to have John explain things to him. Maybe this is why this particular series was so hard to watch. It was because Sherlock needed the care, and John was fed up with taking care of his friend. This is not unusual, especially when you have been friends with someone for a very long time. It was hard to watch John not only hate Sherlock, but ignore his own child. In real life, grief does strange things for people. Again, maybe this was why this series was so hard to watch. It was because this show was very vulnerable, and exposed. The hardships of life caught up with both of these men, and neither one of them dealt with it in a good way. There was lots of pain.

The future of Sherlock is unknown, and many people who were not a fan of the 4th series are calling for it to end. I think it is actually just the beginning of something that could be great. Just because one series isn’t the best, or very popular does not mean that it is time for that show to end. I love Doctor Who, but did I love all the new series? Of course not. However, that doesn’t mean that I think the show needs to end, and it’s damaged beyond repair. It changes, just like any other show. I would welcome a new Sherlock, but there is such a poor taste in people’s mouths that I don’t think they can do one for a few years. It will be welcome once it comes back. While the series fans can be very rabid, they can be just as fickle. I am a fan of Sherlock no matter what, and the story is such a part of our daily culture. It is so huge in London, that I can’t see the rest of the world dictating what happens with the next series for the BBC. I say, keep going because there is a lot more stories to tell. Maybe in a few years, this series is something that we can appreciate and we can see the vision the creators had.