Hello Underdogs! Recently, I have seen so much about Black Eyed Children that I have had to break down and pay attention to what was being said. Before this year, I have never heard anything about this myth or legend, but there are people in the world who claim that they have not only seen these creepy kids, but they have actually had a conversation with them that they will never forget! While the phrase, “Black Eyed Children,” has only been around since the 1990’s, their stories are much older. You may not believe in the Black Eyed Children, because like many other things connected with the paranormal world, there is little to no proof of them being real. Is this whole thing an urban legend, a good story someone made up, or something that is meant as a warning?

Black Eyed Children are supposedly between the ages of 6, but not much older than a early teenager. They appear as normal as any other child, save for a few differences. First, it is said that these children have very pale skin. The second, and most obvious and alarming difference is the huge black eyes that fill up the entire eye. There is nothing in the eye but a dark black color.  Many times these children are trying to get something like help, a ride, a way into your car, or even your home! Normally, there are no adults around these children anywhere, and they have appeared either on their own, or in pairs. These children are always seeming like they are trying to get in to your space, but can’t unless you invite them inside your home or car. 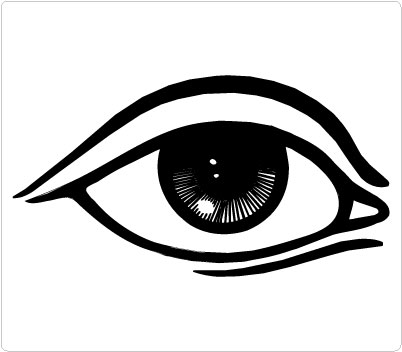 The legend goes, the Black Eyed Children will approach you either in your car and seem like they are lost and are in need of a ride. Or, they will knock on your door at all hours and ask for you to let them inside. They will be always asking for some sort of help that would lead them from being outside, to inside with you. Typically, people don’t notice the eyes right away. In fact, they normally describe an overwhelming feeling of wanting to help these children no matter how strange the circumstances may seem. (Example, a small child showing up at your locked apartment building in the middle of the night and asking you to invite them inside. Or, a child showing up outside of your car in a place no one should ever be.) Then they say that they experienced a headache, dizziness, and an overwhelming feeling of fear and dread. That’s when they seem to notice the strange, black eyes of these children and realize that something isn’t right. Even though the people who see these children are afraid and want to run, the feeling of wanting to let them in is so strong that it has been described as hypnotic. They find themselves opening the door to these children even though everything in them tells them to stop!  Many times they are able to fight this off, or simply be able to walk away, and ignore them until they leave. No one really knows what happens if you do let these Black Eyed Children in to your space. Obviously, people are fearful that they are there to do something bad such as bodily harm, or even stealing their souls!

The story of the Black Eyed Children can be traced back to a writer named Brian Bethel in 1996. He wrote about them in a paranormal newsletter and the story has gained popularity since then. However, is this just a work of fiction, someone trying to start a new urban legend, or was there some truth to this story?  There are many cultures that believe that there are evil things in this world that will take the shape of something that seems innocent in order to lure you in to whatever they want or need from you. Many people will see a child, and not quickly think of them as anything other as innocent and helpless. It is a trick to get you into trouble before you realize all is not what it seems, and by the time that you do, it is too late!

Black Eyed Children might be a real thing, but it could also be just like many other urban legends that are not only meant for entertainment, but also for a lesson. This phrase started in 1996, so this is before the onset of the virtual world that we live in today. We can all agree that the world has become more of a dangerous place now, more than ever before. Unfortunately, this danger does not only come from adults, but from children as well. This urban legend could have been invented to warn us against helping people that seem like they are meek, because they might be a wolf in sheep’s clothing. For example, children have used their position of being young and innocent to gain access to a home to rob, or even kill. Teenagers are famous for violent outbursts and maybe these Black Eyed Children stories are to warn us to always use common sense, and always be on guard. When you let that guard down, and be drawn in by worrying about a child who needs help, you might be opening yourself up to a world of trouble. Adults are also famous for using children to lure people into becoming distracted by helping them while the adult make their move to rob, kidnap, or kill the very people their children are asking help from. It’s very sad, but it happens all the time, and this urban legend could have been used to spread the word to not be so trusting because evil can still be in any form.

Do I think they are real? Well, here is my story and you decide for yourself. About 10 years ago, I was living in a rented house with my best friend. It was around midnight, and we had just been watching movies. We were both laughing and talking. It was a nice evening so I had some of the windows open, but the door was closed and locked. As soon as I turned off the TV, I heard a voice. It happened so quickly that at first I wasn’t sure if I had just caught the last line of a commercial or something that was playing on the TV. But my roommate heard it too and was as alarmed as I was. I felt a sense of dread and fear. I then heard a girl’s voice say, “Let me in.” The first instinct that I had was to ask, “What?” I looked at my friend and she heard it too, but I had no clue what direction it was coming from. It was either from the side window, or the porch. However, I couldn’t see anyone. The girl repeated, “let me in.” By this time, both of my dogs were on high alert. My girl dog was hissing, and the boy dog had his teeth bared and was ready to attack. I was afraid.  Something seemed very off!

My friend had enough sense to ask her what was going on. A young girl’s voice again asked to be let in the house, and that she needed help. She told her that we had dogs, and there is no way that we were going to let her in. She then began to beg to let us in the house, and that her boyfriend had just beat her up. I told her if we let her in the house, the dogs would attack her. The girl again begged to be let in the house. In the meantime, my friend grabbed her gun, and dialed 911. The feeling of overwhelming fear and dread was thick. Something didn’t see right, and even though I was sure that nothing but trouble was beyond that door, I had to stop myself from opening the door and helping this girl out, who claimed she was in trouble. My dogs were hissing, and lunging at the door, which was also strange. Finally, a few moments passed to where I could clear up and speak and told her that there is a loaded gun behind this door with a person who is licensed to carry, and will use deadly force if needed. The police have been called, you can stay where you are, outside and they will help you get away from your boyfriend.  She then begged us to not call the police and let her in. I told her they were on the line right now, and will be here in a matter of moments.

I never saw this girl, but she sounded young. She tried many times to get in the house, and only left after she was for sure that the police were coming. I really did have the drive to open the door and see the person who was speaking to me, and if she really needed help, then I wanted to assist her. It’s a natural instinct to want to help someone, especially if they are presenting themselves as being in a vulnerable situation such as being young, and being abused. by someone.  The police didn’t find anyone, but did see some kids roaming around the neighborhood. A week later, I read that there were people a few blocks down who did fall for this act, and let this young lady in the house. They robbed and beat the elderly couple who let them in the house. It was the same story that happened to us, except we didn’t let them in. They were young teenagers that were never caught. This is not a story of a story I heard like many urban legends.  This happened to people who didn’t live far from me. It was recorded in the news. And, the house that was robbed was right next to another very good friend of mine who happened to hear the neighbors being attacked and chased them away with a shovel.  Where these teenagers, Black Eyed Children, or were they the reason that legends like this exist?

There is no proof either way, but there is a very good lesson. You must put your own personal safety and well-being first, and not bee too trusting. If some person is asking for help in a strange situation, such as showing up on your doorstep in the middle of the night, call the police.  If they honestly need help, then the police will do their job. Not everyone who pretends to be in need of help is actually needing your assistance. They mean to harm you. It is a sad world that we live in that we have to think twice before offering help to someone who may need it, but you have to take care of yourself first, or you might not be around tomorrow because someone took advantage of your natural need to help others. Take care of yourself, because you need to always be on guard. The best way to help is to call the police and then back off.

What do you think, are Black Eyed Children real? Leave your comments below!